Today’s fast-paced lifestyles need quick solutions to all our problems.  This applies to our health also. People are looking at quick relief for their ailments rather than permanent cure. The modern medicine system or allopathy is serving the purpose. However, we are paying a price of short-term benefits and losing health over the long-term. The Ayurveda, which is Indian origin, was very popular and dated back to 5000 BC. Unfortunately, science has lost its significance in between, and allopathy has gained prominence. Both the sciences have their advantages and merits over each other. We will compare the benefits of both the sciences in this article.

Ayurveda is an ancient science of medicine that is holistic in nature. The knowledge of Ayurveda was passed on through learnings from sages and through word of mouth. Ayurveda’s word is derived from the Sanskrit language where “Ayur” means life and “Veda” means science. Ancient science balances Vata, pitta, and Kapha. The Vata dosha has the air and space elements dominating our body. The pitta dosha has the fire element dominating our body, and the Kapha dosha has the earth and water elements dominating our body. Excess of any of the three is considered detrimental to human health. The science of Ayurveda focusses on maintaining balance in the body by avoiding doshas (harms). Ayurveda believes that the doshas impact the body shape, the tendencies like food preferences, and a person’s moods and emotions. The treatment is based on the cause.

Allopathy is a science from the west. The term “Allos” means opposite, and “pathos” means suffering. The treatment consists of providing the opposite effect that the symptoms of the disease have. The term allopathy was first coined by “Hahnemann” in 1842. This medicine made its entry in India in the 1500s. The allopathic treatment is given by the license’s medical practitioners like doctors, nurses, etc. Allopathy believes in treatment based on symptoms of a disease and not the cause of the disease. The practitioners are highly skilled and trained. Modern technology helps to identify the disease at a preliminary stage. The treatment is based on diagnosis and tests. 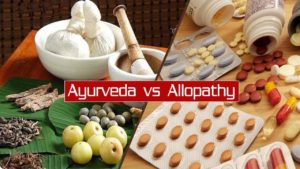 We have attempted to make a comparative study of both the sciences and bring before you the benefits and drawbacks of the same. Always remember, “health is wealth.” Please be wise with your health and take good care of yourself.