Medical professionals play a major role in every human life and the medical profession is considered as one of the top and leading professions around the globe.  In India Medical course that is MBBS is considered as top and best stream and many students give entrance exams. NEET  board conducts an exam for lakhs of students for entering into Medical colleges. Only a few get into the college as competition for MBBS seats is very high there are many top and best medical colleges in every state. 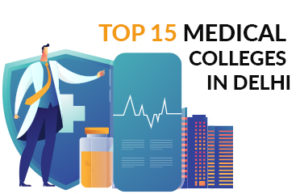 Delhi, India has few oldest medical colleges established after independence and has other age-old colleges. Every medical college must have hospital and other medical lab equipment for students to practice and have good infrastructure, hostel facilities etc. Top   10 medical colleges in Delhi  list is given below

1.WHAT IS THE COST OF MEDICAL COLLEGE IN DELHI?

2.WHAT IS THE SALARY OF AN MBBS DOCTOR?

The average salary for an MBBS Doctor is around Rs 45,000 to 70,000 depending on the hospital  and  duties of the doctor

3.HOW MANY MARKS ARE REQUIRED IN NEET FOR MBBS?

4.WHICH IS THE NO 1 MEDICAL COLLEGE IN INDIA?

In Delhi, AIIMS is considered as No1 medical college in India

5.IS 12TH MARKS IMPORTANT FOR MBBS?

Yes, 12 th marks are very important for MBBS, at least 50% marks are required for the NEET EXAM

AIIMS Cut Off: Candidates securing qualified marks in Entrance exam with intermediate 50 % will be eligible.

HIMSR  Affiliated To: Deemed To be University

VMMC  Cut Off: Candidates securing qualified marks in Entrance exam with intermediate 50 % will be eligible.

MAMC   Cut Off: Candidates securing qualified marks in Entrance exam with intermediate 50 % will be eligible.

UCMS   Cut Off: Candidates securing qualified marks in Entrance exam with intermediate 50 % will be eligible.

These are the top ten medical colleges in Delhi if find these articles do share with your friends and family and bookmark the Graduatesengine.com website for future updates and articles